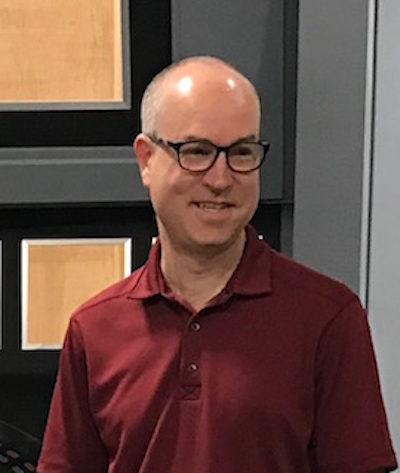 Last time, I began chatting with PASHA SOUVORIN, the Video Pathway Lead Teacher for Gwinnett County Public Schools. Pasha is one of the teachers whose students have been coming to ARES STUDIOS in Lawrenceville, GA to film on the amazing bridge set that was built using funds raised from fan donations. The bridge is now nearly complete, and soon the two Axanarsequel fan films will begin shooting. But in the meantime, this impressive bridge set has been giving local students the opportunity to create scenes and short videos, the likes of which they would never get to do anywhere else.

And these aren’t simply kids with camera phones filming each other playing around. This short time-lapse video posted by the students on their Facebook page shows the amount of care and effort that goes into setting up even a single scene…

In part one, Pasha shared four videos that students had completed so far, each of them impressive considering that these are high schoolers learning the basics of the craft:

And more are planned in the future.

When last we left off, Pasha and I were discussing how the state of Georgia is encouraging its students to take elective classes in video production. After three years of classes, state enrolled students can earn a special seal on their diploma indicating that they specialized in video production. Georgia will also pay for those students who complete the technical video path to take the Adobe Certified Associate test in Premiere Pro.

Things certainly have changed a lot since I was going to high school! And that’s where we pick up our enlightening conversation, already in progress…

JONATHAN – So I guess Georgia is pretty unique in offering video electives for their students?

PASHA – Actually, it’s just the opposite!

PASHA. Yes. Video production is now taught as a high school program all over the country. It has grown particularly large in Georgia over the last five years. It started appearing in high school classrooms in the 1980s. In the early 2000s, video production spread rapidly due to the drastically lowered cost of computer-based editing systems like iMovie.

JONATHAN – I use iMovie!

PASHA – So do many students, although my students are using Adobe Premiere Pro.

JONATHAN – Ah, to be young and technical again! So, I just realized, Pasha, that I haven’t asked you about your background yet. Are you a video guy who decided to teach or a teacher who decided to learn about video and specialize in it?  Do you teach any other subjects, or just video production? PASHA – I began my career as a Language Arts teacher, and I thought I’d teach Literature for my entire career. But 15 years ago, my school had an emergency where they needed someone to “cover” a video production classroom for a few months while the regular teacher was out. I took that as a temporary assignment, but then fell in love with video production and have been doing it ever since.

I still think of video production in the same way that I approached literature when I taught that: as a form of communication. I have also taught web design, photography, and digital media. I consider myself to be a professional teacher. My job is to create environments that motivate and support students while they learn new information in order to solve complex problems. Making a movie is a complex problem. I teach the knowledge and skills necessary to solve that problem.

But the most important thing I do is to put students into a situation where they can use that knowledge while overcoming the obstacles along the way to actually create a movie.

JONATHAN – So what exactly do you teach the kids?  What is the curriculum?  Does everyone in your class(es) cover every aspect of production, or do some kids focus on specific things like lighting, sound, editing, writing, direction, etc?

PASHA – The video production curriculum has come a long way over the last 15 years. It is now a three-year program, called a Pathway, that teaches students about every aspect of video production.

The film industry in Georgia has seen tremendous growth over the last 5 years. Today, more movies and television shows are shot in Georgia than any other place, including Hollywood. Many high school video teachers in the state are now using this job growth to focus on narrative film production instead of journalism and sports. The Georgia Film Academyhas been enormously helpful in showing high school video teachers how to prepare students for jobs in the film industry. They provide a great deal of resources, including training, to the state’s video teachers. I try to make sure that over the course of three years all students learn all aspects of video production. Then they’ll be able to specialize later when they go to college or enter the workforce.

JONATHAN – What does a class do?  How much time is spent in the classroom versus in the field or in a studio?

PASHA – Each school determines the best use of student time. I tend to focus on whole class projects based around single camera production. I find that when I bring students to a remote location (like Ares Studios), they take the work more seriously. The best aspect of field production is that it allows students to picture themselves in a professional work environment. Sometimes it’s hard to convince students to take school seriously, and field production work is a great opportunity to address that challenge.

JONATHAN – What facilities and equipment does your school (and other schools) offer for the students to use? And who funds it—the district, individual schools, or parent associations having bake sales? PASHA – My district, Gwinnett County Public Schools, does a terrific job of funding the video program. They provide cameras, lights, microphones, and all the related gear we need. We also have enough computers with Adobe Premiere Pro for every student to learn editing on.

JONATHAN – What unique opportunities does having access to the Ares Studios bridge set provide to you and your students that they might not be able to find anywhere else?

PASHA – Like I wrote before, access to a professional studio like Ares Studios is an incredible opportunity for my students. The most recent project we shot there was a collaboration between students and teachers from all over Gwinnett County. This was the first time that we created a county-wide film project.

Normally, it’s hard to convince students to join an after-school, not-for-credit project. But when students and teachers saw photos of this set, it really inspired them to want to participate. The challenges on the bridge set are so much closer to the kinds of challenges students would face in the real world. The students had to figure out where to place cameras, microphones, lights, and actors in order to get quality shots. The challenge of overcoming these questions as part of a team, on a real-world movie set, is a priceless opportunity for students. JONATHAN – Some fans have been wondering why, if Alec is opening the sets to your school district, why he’s been funding through Patreon and not seeking a sponsorship or something by Gwinnett County Public Schools. Is there any money potentially available from the district budget to supplement any of Alec’s expenses for rent, utilities, insurance, improvements, etc.?

PASHA – I’m going to talk with people at the county office about funding Ares Studios, but there’s no guarantee. We can’t require students to go on field trips, so spending money on something that would only benefit some students could be seen as a problem (remember, schools are funded by local tax dollars). The experience of shooting at Ares Studios is an extracurricular program, a supplement to the regular video production class. I’ll let you know how the conversation goes, though. It’s always worth asking, right?

JONATHAN – For my final question, I need to share with you that I grew up in New York City, and I kinda took everything there for granted—the Metropolitan Museum of Art, the Museum of Natural History, the Empire State Building, the Statue of Liberty, Broadway, the great pizza and hot dogs, all the local professional sports teams, etc. I didn’t give all of that even a second thought as a high schooler.  Is it the same way for the Gwinnett County students?  Do they see the bridge set as just another place to film (albeit a really cool place) and figure every student probably has access to something like this, or do they realize how uniquely fortunate they are compared to other students? PASHA – Hah! You are absolutely correct in remembering that high school students don’t always step back far enough to appreciate what they have. Some of them do just take it for granted. But there are a GREAT NUMBER of students who are inspired and motivated by this opportunity. The fact that so many came, on their own time, to participate speaks for itself. The first thing they say the first time they see the set is always, “Cool!”

As a side note, some of the students have little experience with Star Trek. When I told them we were producing a Star Trek fan film, one of them jumped in and said, “I want to play Darth Vader!” That led to a nice little class discussion!

But some of them are really into it. And here’s the important thing. Alec Peters is clearly passionate about Star Trek, and that passion shows through in everything at Ares Studios. My colleague Vince Barnett from Scienstars travelled to Georgia for three days—at his own expense—just to help the students get started on this project.

That kind of passion is inspiring to students. When they see adults who have pursued their own passion, it demonstrates to students that they, too, can follow their dreams. People in the fan film community like Alec and Vince are acting as role models, showing students how they can have fun (and maybe even make a career) out of following their own passion. My job is to facilitate and help out so that students can learn a useful skill…and maybe get inspired to follow their own passion!

Come back tomorrow to hear from some of the students themselves on what they think of Ares Studios and the opportunity to shoot films there.